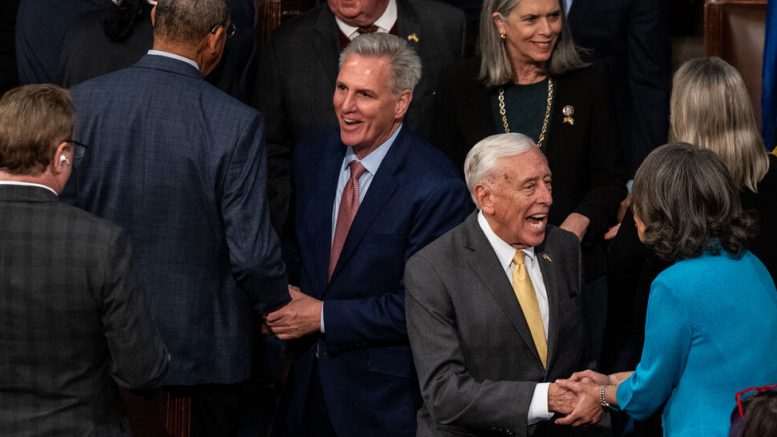 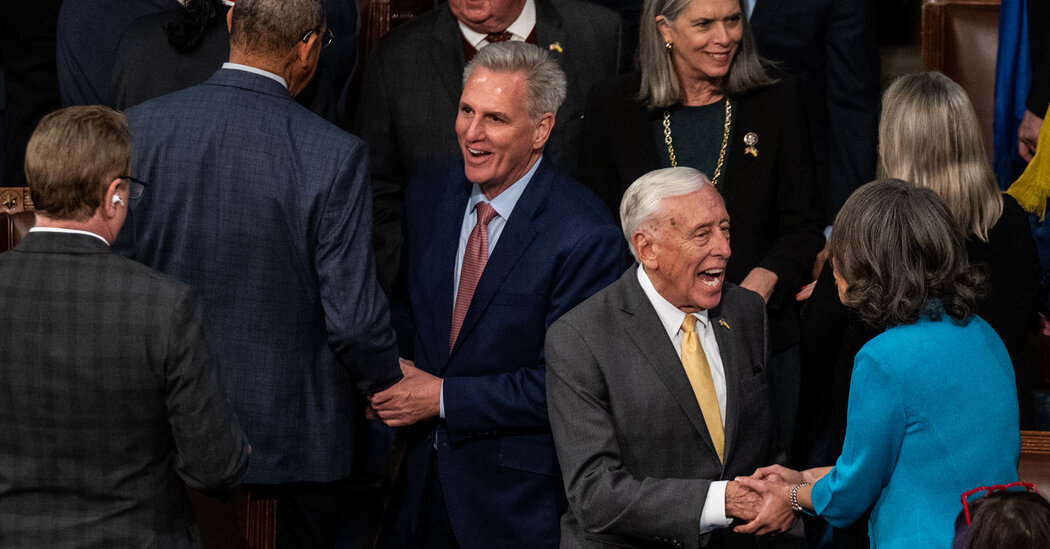 WASHINGTON — Only hours before the vote, Representative Kevin McCarthy of California was still laboring on Tuesday to lock down the support he needed to be elected speaker, with ultraconservative holdouts digging in for what could become a chaotic floor fight at the dawn of the new House Republican majority.

The standoff hung over what was supposed to be a day of jubilation for Republicans, exposing deep divisions within the party as it embarks on its first week in power. It all but guaranteed that even if Mr. McCarthy eked out a victory, he would be a diminished speaker beholden to an empowered right flank.

In a vote planned for around midday Tuesday, when the new Congress convenes, Mr. McCarthy must win a majority of those present and voting — 218 if every member of the House were to attend and cast a vote — to become speaker. Republicans are to control 222 seats and Democrats are all but certain to oppose Mr. McCarthy en masse, leaving him little room for defections from his own party.

With at least five Republicans vowing to oppose him and more quietly on the fence, Mr. McCarthy appeared short of the necessary votes, despite a series of major concessions he has made in an attempt to appease the far-right lawmakers. Republicans were set to meet at 9:30 Tuesday morning behind closed doors as Mr. McCarthy grasped for a last-minute boost of support.

But if anything, the momentum appeared to be headed in the other direction. Representative Scott Perry of Pennsylvania, the chairman of the Freedom Caucus, on Tuesday morning released a scathing statement saying that Mr. McCarthy had scuttled his own chances of becoming speaker by refusing to agree to the demands of the right wing.

After the 2022 midterm elections, Democrats maintained control of the Senate while Republicans flipped the House.

“We’ve worked in good faith for months to change the status quo,” Mr. Perry said. “At nearly every turn, we’ve been sidelined or resisted by McCarthy, and any perceived progress has often been vague or contained loopholes that further amplified concerns as to the sincerity of the promises being made.”

Mr. Perry derided what he described as an “eleventh hour” attempt by Mr. McCarthy on New Year’s Eve to offer “a vague ultimatum lacking in specifics and substance,” and he claimed that the hard-right flank of defectors offered the California Republican a way to secure enough votes to win the speakership.

If Mr. McCarthy is unable to win the support he needs on the first ballot, lawmakers would take successive votes until he or a different nominee secured enough supporters to prevail. No speaker election has gone to multiple ballots since 1923, but Mr. McCarthy has vowed to fight for the job on the House floor until the very end.

Mr. McCarthy’s allies have insisted that the Republican leader would stop at nothing to win the job, and they previewed plans to try to cajole more of the holdouts — especially incoming freshmen who have yet to publicly declare positions — on Tuesday.

“I think we can get there,” Representative Jim Jordan of Ohio told reporters as he left a meeting in Mr. McCarthy’s office on Monday night.

Asked how many ballots it would take for Mr. McCarthy to prevail, Mr. Jordan replied, “We’ll see tomorrow.”

In the months leading up to the vote, Mr. McCarthy had made a series of concessions to win over the defectors, including encouraging his members to vote against the lame-duck spending bill to fund the government and calling on Alejandro N. Mayorkas, the homeland security secretary, to resign or face potential impeachment proceedings.

Over the weekend, in a last-ditch effort to sew up the votes, Mr. McCarthy put forward his most significant offers yet. He unveiled a package of rules governing how the House operates, including the so-called Holman rule, which allows lawmakers to use spending bills to defund specific programs and fire federal officials or reduce their pay.

His biggest concession was agreeing to a rule that would allow five lawmakers to call a snap vote at any time to oust the speaker. That had been a top demand of conservatives who had previously used the procedure to drive out Speaker John A. Boehner, Republican of Ohio.

But it was not enough to appease the obstreperous right flank of his party, which wanted any single lawmaker to be able to force such a vote. After Mr. McCarthy announced the concessions, nine more Republicans emerged — most of whom had previously expressed skepticism about his bid for speaker — to criticize Mr. McCarthy’s efforts to win them over as insufficient.

At the same time, some moderate supporters of Mr. McCarthy said they were unsettled by the hefty concessions, arguing that a small group of naysayers should not be allowed to hijack the new majority.

“We’ve done enough,” Representative Don Bacon of Nebraska said on Monday night, emerging from a meeting in Mr. McCarthy’s office. “It’s been unilateral concessions on this without getting anything back in return.”

“We’re not going to let five people take ransom from us, or six, whoever it ends up being,” he continued. “I don’t think it’s right.”

No viable candidate has stepped forward to challenge Mr. McCarthy, and it was not clear who would be able to draw enough support if he did not prevail. Potential alternatives who could emerge if he fails to secure enough votes include Representative Steve Scalise of Louisiana, his No. 2; Representative Patrick T. McHenry of North Carolina, one of his close advisers; and Mr. Jordan, a onetime rival who has strong support among the powerful ultraconservative faction.

Donald Trump Faces a Week of Headaches on Jan. 6 and His Tax Returns

Kari Lake Claims Her Voters Were Disenfranchised. Her Voters Tell a Different Story.